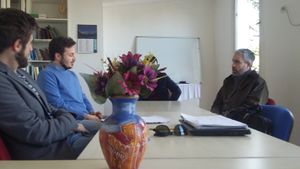 After a short presentation of volunteers about the EVS project, Francisco asked to Mattia and Gabriele their opinions and impressions about Georgia and Italian Culture abroad. They said that they have found a strong and unexpected interest and fascination, strengthened by the various offer of cultural events and meetings. They also spoke about the Italian branch of Parliament Library in Tbilisi, sited close to Liberty Square. They have visited this place 2 days before, finding a good diversity of books and volumes. Francisco was quite surprised. He didn't know about this sector and he was interested in visiting it. He also asked about a Spanish branch in the Library, but Mattia and Gabriele didn't know about that.

Then, Francisco started to talk about his tasks here in Tbilisi. As stated in Vienna Convention on Diplomatic Relations (1961) and on Consular Relations (1963), Dr. Capote Yeregui is serving as Consul and Chargè d'Affairs ad Interim of Kingdom of Spain in Georgia. He provides political, cultural and diplomatic assignments. His office is located in Liberty Square, where he works with his secretary and his assistant-driver. Due to the small dimension of Spanish community in Georgia (less than 100 people, in Francisco's opinion), Spain does not have an embassy in Georgia yet. As for Azerbaijan], both Consulates depend on Spanish Embassy in Ankara, Turkey. Despite it, in recent future Spanish Embassy will be opened in Tbilisi too, as stated by Francisco.

The aim is to assure diplomatic functions and assistance to whole Caucasus region. But it's a difficult task, deeply linked to frozen conflicts and relations between some Caucasian States, like Azerbaijan and Armenia (now depending on Spanish Embassy in Moscow). Mattia and Francisco totally agreed about conflicting and unsolved situation all along Caucasus. Not only Nagorno-Karabakh, but also Abkhazia and South Ossetia are absolutely relevant problems. For Georgia it's a complex task to solve, but it's necessary to continue on the path of European (and maybe Nato's one) Integration. Mattia and Francisco again agreed about the need of long-term project for feasible and desired Georgian membership. But the solution of several problems, like frontiers' matters and de facto recognition of occupied lands, and the improvement economic and democratic institutions can not be pushed back. So, the slow reform process needs to go on, to wisely prepare the "Eastern stretch" of EU. Meanwhile, relations with Europe are very good and productive. Georgia is the Caucasian country with the highest rate of development and economic growth. As said by Francisco, Spain too has a limited, but nice trade with Georgia in textile, infrastructural and food industry. As stated in a recent ranking, Georgia is the 6th Country in the World in ease to open business. In Francisco's opinion, it could be useful to domestic economy, but some kind of regulations are needed to prevent violations.

Then, talking about their studies, Mattia and Gabriele spoke a lot about Bologna, a city which Francisco knows very well. He studied there at Collegio di Spagna, where now is an associate member. He remembered many places, describing them with an impressive photographic memory: the core of academic neighbourhood, Via Zamboni, Humanities Department, the Church of San Giacomo Maggiore, that Francisco suggested us to visit.

At the end, Francisco asked to Mattia and Gabriele their future plans once back in Italy. They answered talking about their proactive research of new opportunities and applications, both in Italy and abroad.He showed an admirable culture and knowledge, results of years of studies and travels, during them he developed a wide network of friendships too. Indeed, Francisco served in Spanish diplomatic corp in different places, such as in Quirinale Delegation in Rome, in Mexico and in Saudi Arabia.

After 45 minutes of very interesting conversation, Francisco had to leave, due to another appointment. He invited us to replay this meeting in a more informal date. Then, Tommaso accompanied him and his driver at the exit of the external area of television.

Categories:
Articles
EVS
Meetings and interviews
chevron_left
Previous
Meeting with Irakli Avalishvili
chevron_right
Next
Recensione articolo "Analysing the shadows: private tutoring as a descriptor of the Education System in Georgia"